With thick purplish stems (up to 5cm in diameter) lengthwise ridged and smooth or pebbled (Fig 5,6).

Large coarse, compound umbels which are spherical and often up to 30cm in diameter (Fig 7).

It may have alternate partitions and chambers in the base of the stem and a yellowish oily secretion on cut surfaces like Spotted water-hemlock, but usually does not have thickened or tuberous roots like those that are characteristic of Spotted water-hemlock. The veins in leaflets of Angelica go to the tips of the teeth on the margins (Fig 3,4) rather than to the notches between the teeth as in Spotted water-hemlock (see Figure 3 and 4). These plant is known to be larger in size than water hemlock, but smaller than giant hogweed.

More than 60 species of medicinal plants are said to belong to the Angelica genus. Many of these plants have been used, particularly in the far-east, in traditional medicine systems serving as an anti-inflammatory, diuretic and diaphoretic remedy for arthritis, flu, influenza, coughs, chronic bronchitis, pleurisy, typhoid, headaches and rheumatism. Coumarins, chalcones, polysaccharides, acetylenic compounds and sesquiterpenes have been isolated as active ingredients in this plant. Research has shown that Angelica may have potential in modern alternative forms of medicine and drug development. Sarker, S.D., Nahar, L. Natural Medicine: The Genus Angelica. Current Medicinal Chemistry, 2004;11(11):1479-1500.

Angelica is a European perennial plant which can be grown as a culinary herb. It is believe to have originated in Syria. Stephens, J.M. Angelica. University of Florida. 2009.

Fresh stems and leafstalks have been used as garnish in the making of candied angelica. Distilled oil and seeds have been used in flavoring foods and the roots in medicine. Oil from the plants roots have been used in rum, gin and fruit flavourings for liquors, beverages, candy, desserts and chewing gum. Stephens, J.M. Angelica. University of Florida. 2009. Winter, R. A Consumer's Dictionary of Food Additives. 1978. Crown Publishers, Inc., New York. 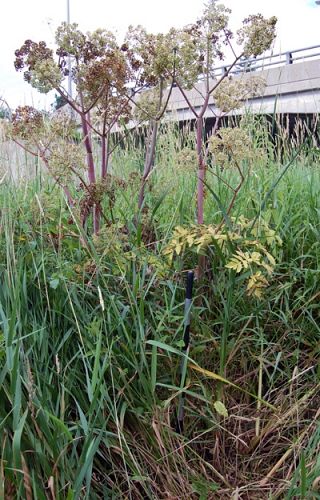 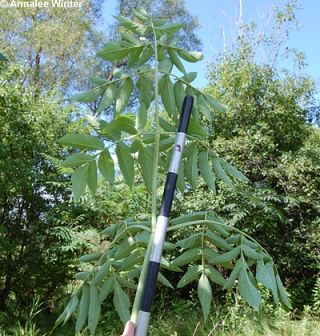 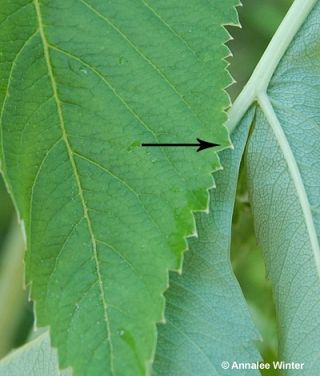 Veins in leaflets go to the tips of the teeth on the margins rather than between the teeth as in Spotted water-hemlock. 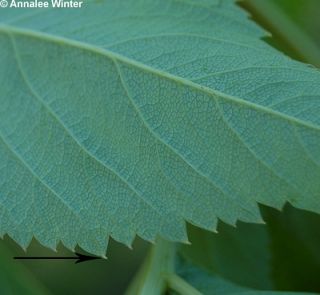 Underside view of veins to tips. 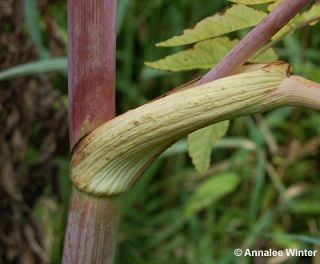 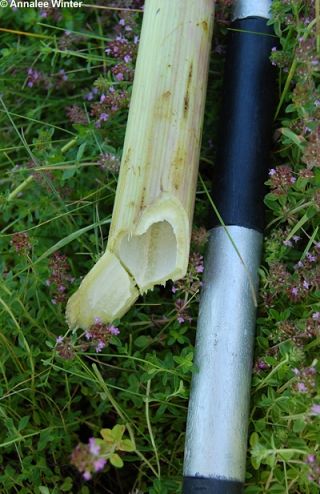 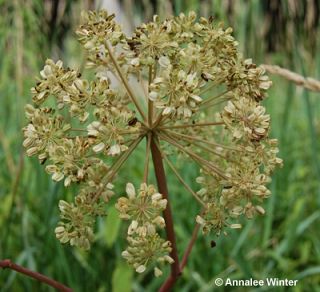 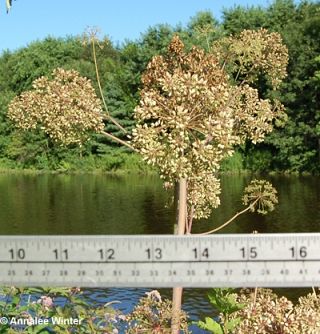 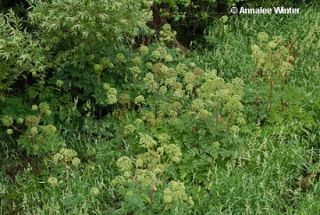 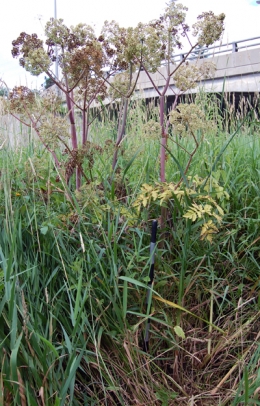