Reproducing by seed and by underground roots.

Stems erect, 1-2m high, stout, unbranched or sometimes with 1 or 2 branches near the top, usually several stems close together from the underground root system.

Leaves are opposite (2 per node) or whorled (3 or more per node) and are oblong with a rounded or tapered base and a rounded to somewhat pointed tip. The leaves are without teeth and the underside is covered with fine velvety hair, but the upper surface is usually without hair and is a deeper green colour.

Flowers in a dense, nearly spherical clusters or umbels at tip of stem and from axils of upper leaves, each flower 8-10mm across, greenish to purplish or whitish, with 5 thin sepals and 5 larger petal lobes bent back along the flower stalk and an unusual arrangement of 5 hoods and horns forming a crown or corona around the top of each flower. The flowers are uniquely adapted for insect pollination, having waxy pollen in tiny wishbone-shaped structures which hook onto an insect's leg but come off when transferred to the flower of a different plant. Fruits at first green, fleshy, 7-10cm long and Â¼ to Â½ as wide, covered with soft, warty protuberances, later turning brown, splitting lengthwise along a single opening and releasing numerous seeds; usually only 1 or 2 (rarely up to 5) seedpods develop from the many flowers of a single flower cluster; seed flat, oval, with a tuft of long silky hair at one end. The whole plant, root, stem, leaves, flowers and fruit, contain abundant, thick, white, milky juice. Flowers from mid-June to August, and matures seed from August to October.

Common milkweed occurs throughout southern Ontario in pastures, meadows, waste places, roadsides and cultivated land. It is especially common in the Manitoulin Islands and the east-central portions of southern Ontario, but it seems to be increasing in most other portions of the province as well.

It is distinguished by its pairs of broad, oval, softly hairy leaves, umbels of purplish to whitish flowers with their peculiar arrangement of parts, and the large, thick, softly warty seedpods. A milky juice containing alkaloids are contained within the plant.

Other species of milkweed have been found to be highly toxic to livestock, and circumstantial evidence suggests that the common milkweed may, under some circumstances, also be toxic.

Milkweed is the primary source of nutrients for monarch butterfly larvae. In addition, they are an important source of nectar for other species including bees. 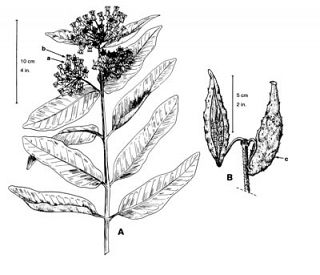 A. Top of flowering plant. B. Seedpods with 1 open and showing its layers of seeds with their tufts of long, silky hairs. 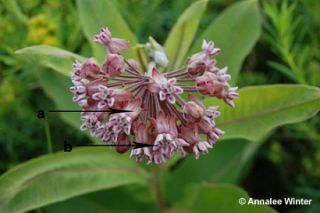 Dense flowers of milkweed plant. a) 5 larger petal lobes bent back along flower stalk b) 5 horns or hoods forming a 'coronoa' or crown around the top of each flower. 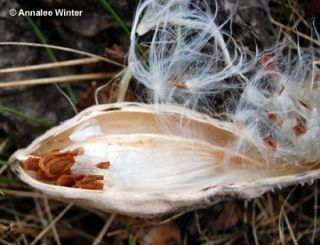 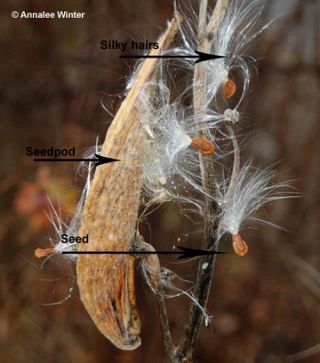 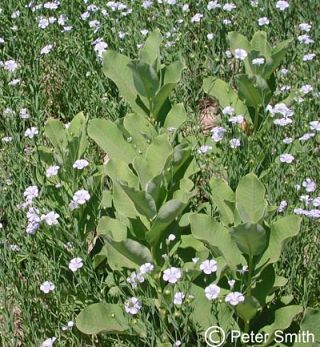 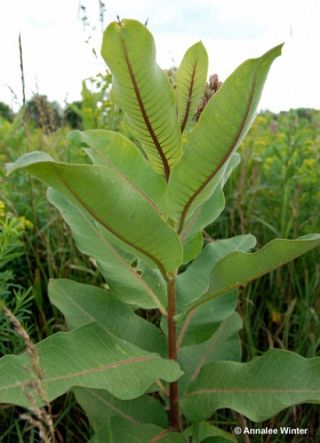 Milkweed plant in central Ontario, late July. Leaves are opposite or whorled. 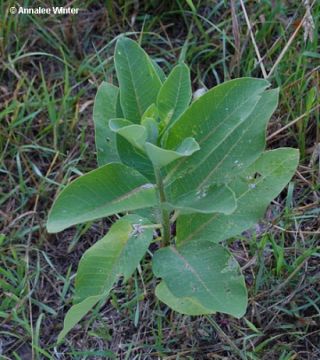 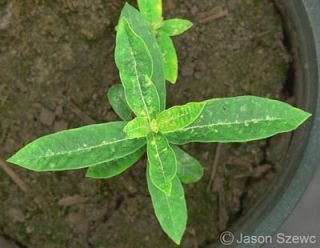 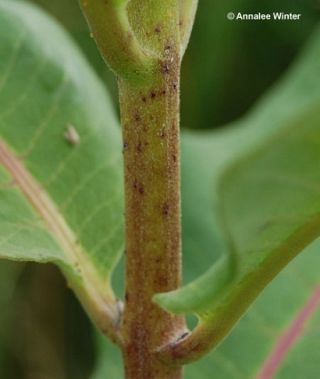 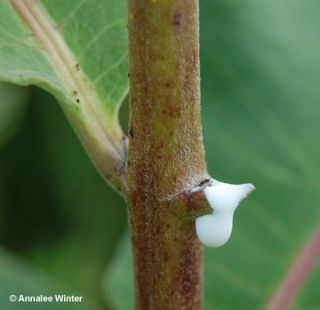 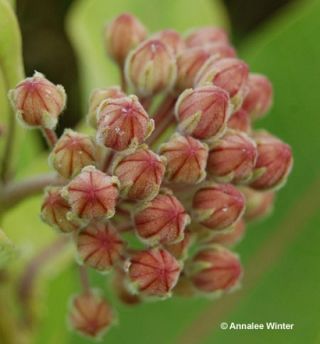 Flowers of milkweed before opening. 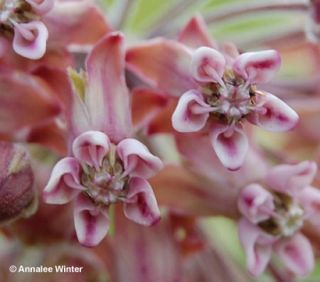 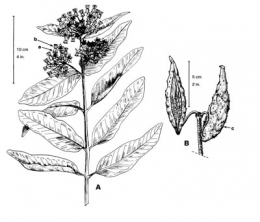