Flowers individually very small and crowded at the ends of stems and branches, pale yellow; seedpods spreading from the stem on very slender stalks, curved upwards and nearly parallel to the stem; seeds bright orange, oblong, about 1mm long. Flowers from late May until the end of the summer. The whole plant has a distinctive musty odour, especially strong when cut or bruised.

Flixweed occurs in scattered localities throughout Ontario, usually in gardens, fence lines, waste places, and along roadsides, but only occasionally in grainfields.

It is distinguished by its gray-green colour, finely divided leaves, erect seed pods on very slender stalks and its very distinctive musty odour. Flixweed is sometimes mistakenly called Tansy mustard because it resembles and is closely related to the true tansy mustards. They are Gray tansy mustard, Descurainia richardsonii (Sweet) O. E. Schultz, (moutarde tanaisie grise, sisymbre toffu) and Green tansy mustard, Descurainia pinnata (Walt.) Britt. var. brachycarpa (Richards.) Fern., (moutarde tanaisie verte, sisymbre Ã  fruits courts) Both are native plants in North America but are probably less common as weeds in Ontario than is Flixweed which was introduced from Europe. Gray tansy mustard is grayish like Flixweed but its leaves are less finely divided, seedpods shorter (about 10mm long) on shorter stalks (5mm long) and are usually held erect and very close to the stem like those of Hedge mustard. Green tansy mustard has leaves nearly as finely divided as those of Flixweed but the stem and leaves are green rather than grayish-green. Green tansy mustard has unbranched hair with a slightly enlarged head or gland at the tip, just barely visible to the naked eye, and these glandular hairs give the plant a slightly sticky texture. Seedpods of Gray tansy mustard are broader than those of Flixweed, somewhat cigar-shaped, about 10mm long and nearly 2mm wide. Green and Gray tansy mustard are more likely to be found in native situations such as open, gravelly or rocky soil, and sandy woodlands but they also occur in similar situations to those of Flixweed. 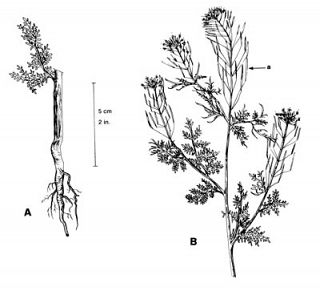 A. Base of plant. B. Top of flowering and fruiting plant. 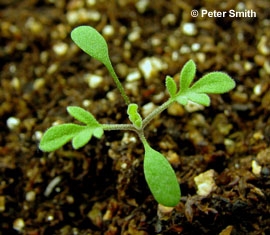 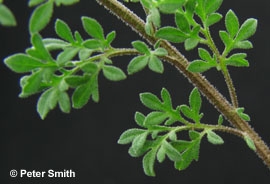 Close up of feather-like leaf. 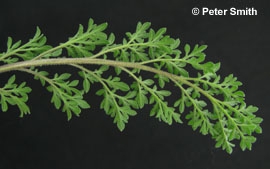 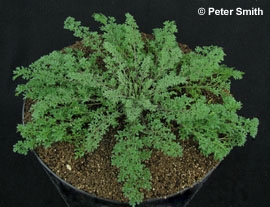 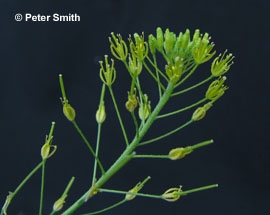 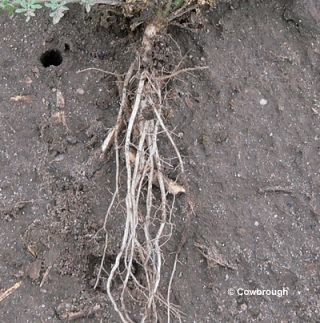 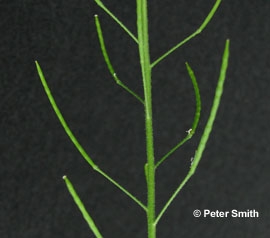 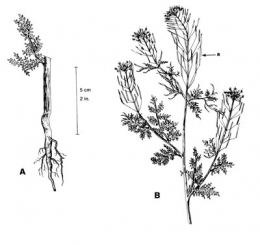