Stems mostly erect and bushy-branched throughout, or nearly prostrate, finely hairy when young, smooth and somewhat succulent when older, green or reddish.

Leaves opposite (2 per node), stalkless, oblong or lanceolate, usually somewhat asymmetrical (uneven) at their bases, dark green above and often with a red or reddish-purple blotch near the middle, lighter green and usually somewhat finely hairy on the undersurface, margins distinctly toothed; lower leaves of upright plants often dropping early, leaving the lower stem and lower parts of the branches nearly bare.

Flowers complex, individually very small without sepals or petals and unisexual but clustered together in structures called cyathia very similar to those described for Leafy spurge; each cyathium is a tiny cup about 2-4 mm across with 4 tiny wings at its margins and containing several single stamens and a single 3-lobed pistil with a 3-branched style and stigma; ovary maturing into a 3-lobed, hairless seedpod about 2-2.5 mm long and containing 3 small seeds about 1.3 mm long with a few transverse wrinkles on the sides. The whole plant, including stem, roots, leaves and flowers, with the possible exception of mature seeds, contains a sticky, white milky juice which exudes freely from any cut or broken surface.

Spotted spurge is very common in the southwestern portion of southern Ontario, occurring in cultivated fields, gardens, waste areas and roadsides. It can also be found in the counties bordering the north shore of Lake Ontario.

It is distinguished by its usually bushy-branched habit, its opposite leaves with uneven bases and reddish blotches near the middle, its milky juice, and its tiny flowers with 3-lobed, 3-seeded, hairless seedpods. 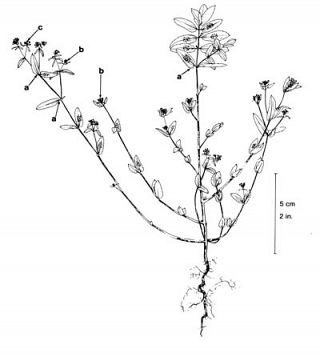 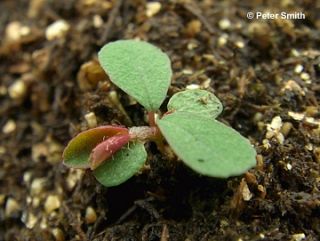 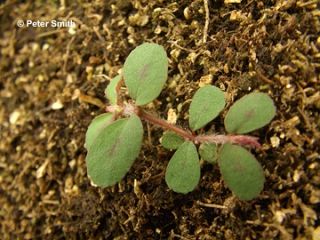 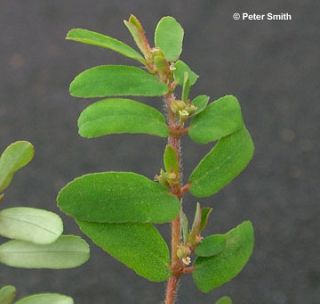 Opposite leaf arrangement of spotted spurge. 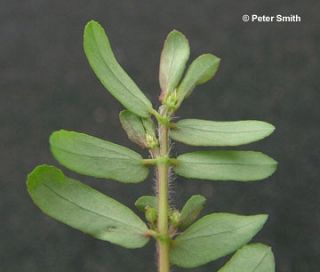 Back of leaves of spotted spurge (opposite leaf arrangement). 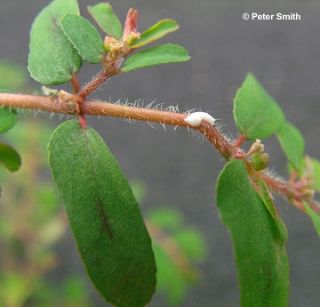 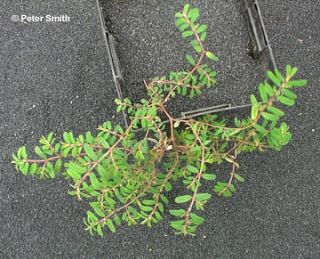 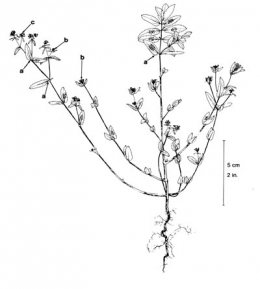