Reproducing by seed and by creeping stems.

Flowers 1 to several (usually in pairs) in axils of upper leaves; calyx short, tubular with 5 short, sharp, soft points; corolla blue-violet to purplish, about 10-23mm long and 6-10mm wide, of 5 united petals, irregular, tubular, 2-lipped at the end, the upper lip with 2 shallow lobes and the lower lip with 3 larger lobes; each flower producing 4 tiny nutlets ("seeds"). The leaves and stems have a strong, disagreeable, almost rancid mint-like odour but the flowers are sweeter and they are sometimes used as a garnish when icing cakes. Flowers from late spring until autumn.

Ground-ivy occurs throughout Ontario but is much more common in the southern parts of the province, infesting gardens, roadsides, waste areas, pastures, open woods and occasionally edges of cultivated fields.

It is distinguished from other low-growing plants by its creeping square stems, opposite, long-stalked, rounded to kidney-shaped leaves with round or wavy teeth, prominent axillary blue to purplish flowers and strong, rather rancid, mint-like odour. 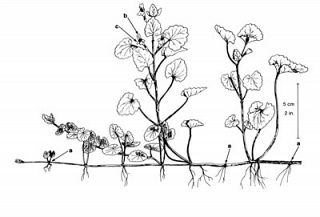 Ground-ivy. Portion of "creeping" stem lying on the ground surface, rooting from every node, as well as producing leaves and upright shoots from most nodes. 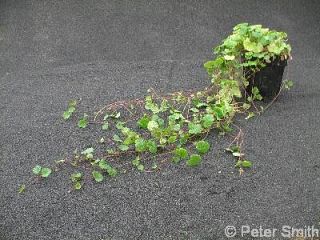 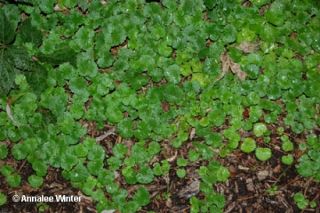 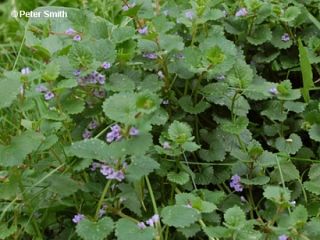 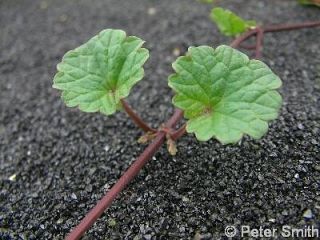 Opposite, wavy-toothed leaves and flower buds 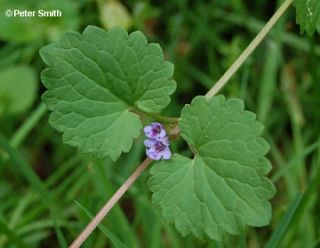 Opposite leaves and purple (blue-violet) flowers on "creeping" stem of ground-ivy. 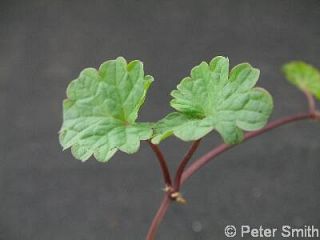 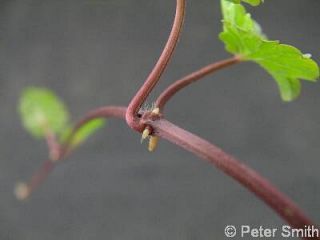 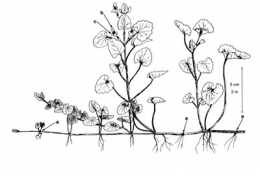