Reproducing by widely spreading underground rhizomes and only rarely by seed.

Stems erect, 75cm-3m high, branched or unbranched, round, smooth, often mottled reddish-purple, hollow except at the nodes, dying back to the ground each winter.

Leaves alternate (1 per node), long-stalked, broadly ovate, 7.5-15cm long, 5-12.5cm wide, square-cut or slightly angled at the base, abruptly pointed at the tip with the tip often stretched out; ocrea (membranous sheath) surrounding stem at and immediately above every node, colourless or light greenish and turning brownish, hairless, often somewhat inflated, but soon disintegrating.

Flowers individually small but numerous and forming showy, greenish-white branching panicles from the axils of upper leaves; flowers unisexual, the sexes on separate plants; seeds only rarely produced, these hanging from the branches, triangular, about 7mm long, shiny, enclosed in a papery, 3-winged, teardrop-shaped, dry calyx. Flowers from July to September.

Japanese knotweed occurs in southern Ontario in gardens, around old buildings or former building sites, waste places and roadsides, having been introduced as a bushy, hardy perennial for use as a screen or foundation planting.

It is distinguished by its very vigorous growth beginning in early spring and continuing to late autumn, its thick, widely spreading. whitish or brownish rhizomes, its erect stems, often mottled, hollow except at the nodes, its broad leaves with abruptly narrowed tip and a prominent ocrea around the stem at the base of each leafstalk, and its showy bunches of small greenish-white flowers. Two or more similar but smaller and usually less vigorous relatives of Japanese knotweed, presently grown as foundation or ground cover, may occasionally also escape from cultivation. 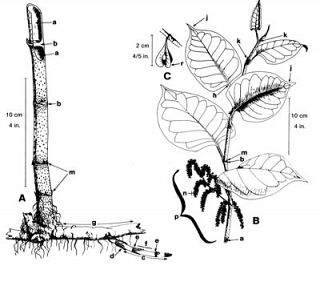 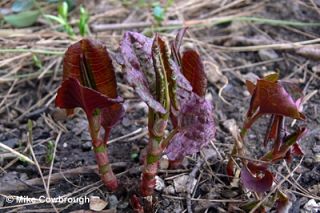 Vegetative growth emerging from the rhizome in Ontario during mid April. 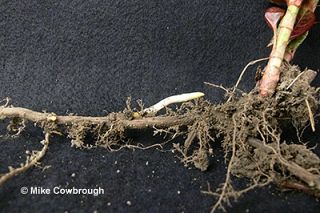 Young white rhizome shooting out from the existing woody rhizome. 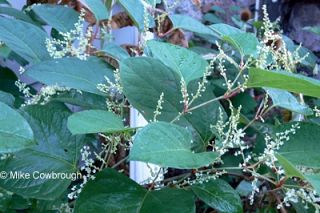 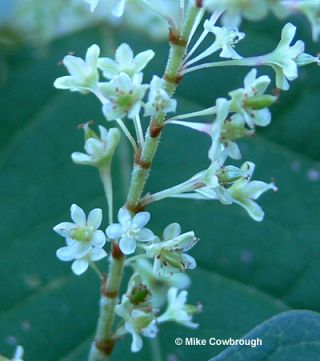 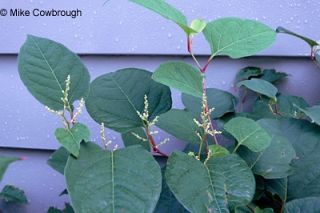 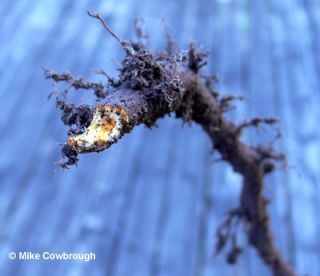 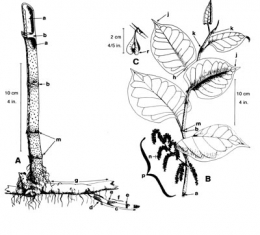