Reproducing only by seeds.

Cotyledons (seed leaves) are long, narrow, smooth, often persisting at the base of a developing stem and sometimes still present at maturity. Stalk leaves are oval or triangular, somewhat angular heart-shaped at the base with the edges of the lowermost main branching veins usually exposed in a broad V or M (not enclosed within the leaf blade as in the leaves of most other plants). Leaf margins are coarsely toothed and surfaces harsh or rough-hairy. Lower leaves are frequently opposite (2 per node), but upper leaves are alternate (1 per node).

Flower heads clustered in axils of leaves and at ends of branches. Sexes are in separate heads but both sexes on the same plant. Heads of male (pollen-producing) flowers are small, more or less spherical, not spiny, usually several in small clusters above the larger, spiny heads of female (seed-producing) flowers. The seedpod or "bur" actually 1 complete flower head containing 2 female flowers, becoming very hard and woody, covered with numerous slender, hooked spines and terminating in 2 very hard, hooked, beak-like spines, and turning brown at maturity. Each bur contains 2 seeds, usually 1 a bit larger than the other. Flowers from August to October.

Cocklebur occurs throughout Ontario around farmyards, in fields, along roadsides and river flats. It is particularly common in low areas which may be wet only during spring and fall, and is usually more common in fine-textured soils such as clays and clay loams than on coarser soils.

Mature plants of Cocklebur are readily distinguished by the large coarse burs and their harsh leaves. Young and non-flowering plants are distinguished by their oval or broadly triangular, rough-textured leaves which have the characteristic V- or M-shaped base with the edges of the main lower branch veins exposed; the lowermost leaves opposite, upper ones alternate. Seedlings of Cocklebur are distinguished by their large, long, narrow, smooth cotyledons (seed leaves) and by the remnant of the bur usually attached to the root at or below the ground surface. Plants of Cocklebur are highly variable in height, amount of branching, overall shape of leaves, arrangements of inflorescences and size and shape of each bur. This group is not well understood taxonomically so, although several botanical names have been used for various groups of cockleburs, all of the Ontario plants can be referred to as Xanthium strumarium in the broad sense.

Caution: Seedlings of Cocklebur are poisonous to livestock, especially to young pigs which seem to relish their taste. 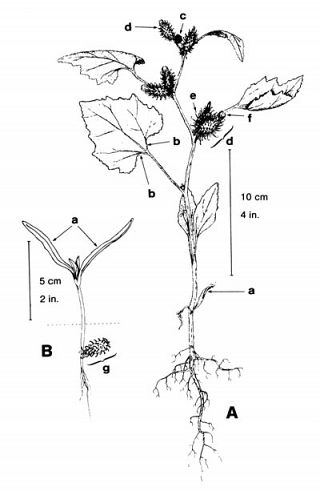 Cocklebur. A. Plant. B. Seedling. 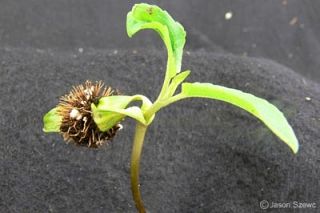 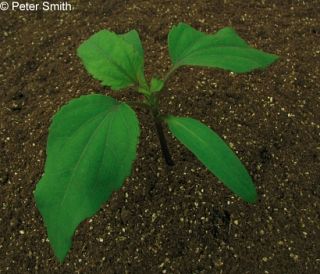 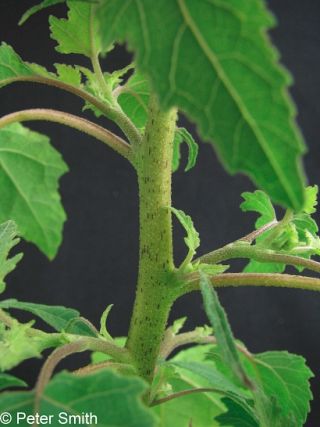 The characteristic dark spots on the coarse stems of cocklebur 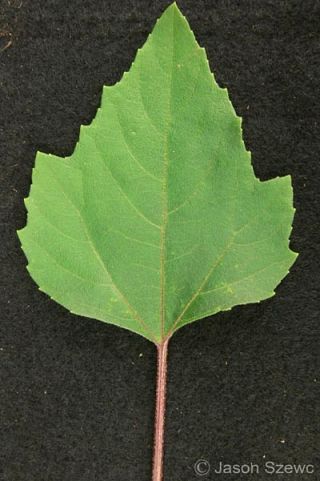 Upper side of cocklebur leaf 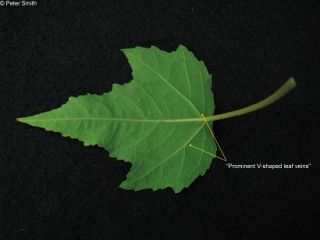 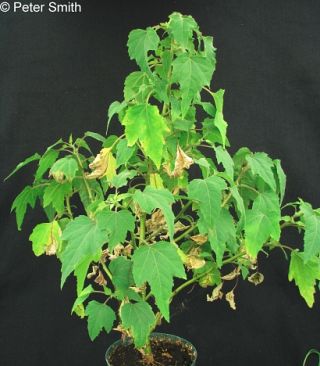 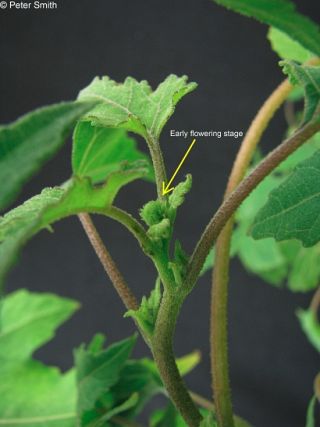 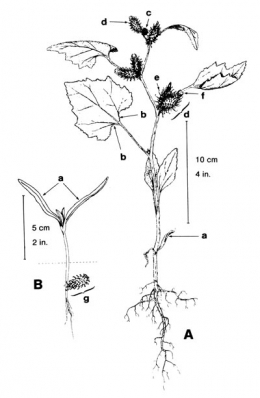