reproducing by seed and by spreading underground rootstalks.

Stems erect, usually covered with fine woolly hair, about 60 cm tall but up to 100 cm in fertile situations, or very short in lawns or trampled situations.

Leaves very numerous at base of plant but fewer and smaller upwards on the stem, finely divided or feather-like, lower ones long-stalked, the upper stalkless, alternate (1 per node), green to grayish-green, finely woolly to silky-hairy.

Flower heads very small but numerous in dense, flat-topped to rounded clusters, each head 3 - 7 mm across, ray florets usually only 5 per head, white or rarely pinkish; disk florets more numerous, whitish; seeds small, flat, grayish with whitish margins. The whole plant has a characteristic sage-like odour which is offensive to some people but attractive to others. Flowers from June to late autumn.

It is distinguished by its very finely divided, feather-like or ferny leaves, the dense patches from its spreading underground root system, its flat-topped clusters of small flower heads, each head with usually 5 tiny white ray florets, and its characteristic sage-like aroma. Forms with pinkish to purplish or yellow flowers are cultivated as ornamental perennials and may escape to lawns and roadsides.

A. Base of plant from horizontal underground rootstalk. B. Flowering stem. 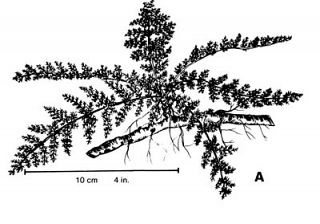 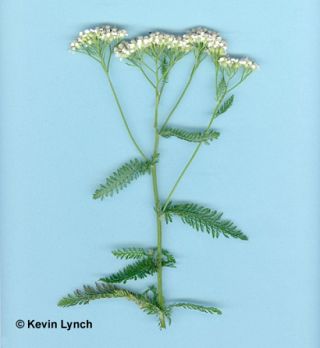 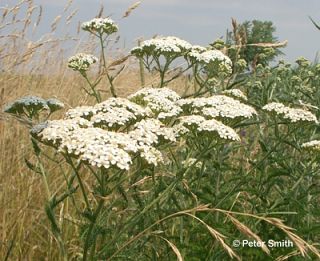 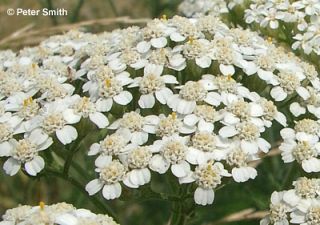 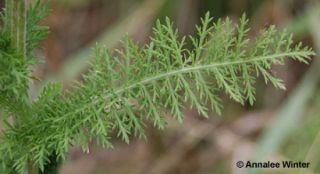 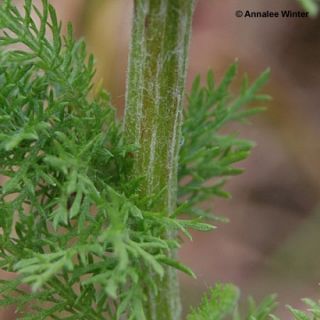