Flowering stems erect, 40-90cm high, branched in the upper part but seldom seen when the weed infests lawns or gardens.

Basal leaves arise directly from the rhizomes at the ground surface; these and the leaves arising from below the ground surface (called "radical leaves") are all long-stalked, divided in 3 main parts but quite variable as each part may be redivided into as many as 5 subdivisions, a single leaf therefore consisting of from 3 to as many as 15 broad, flat, somewhat oval leaflets, the separation often incomplete giving the lobed leaflet a "mitten-like" appearance; all leaflets irregularly coarsely to finely toothed; base of terminal leaflet symmetrical; base of lateral leaflet not symmetrical; stem leaves alternate (1 per node), similar to basal leaves but usually smaller, with fewer divisions and with a short stalk; bases of leafstalks broad, flat and winged so they more or less encircle the stem at the node.

Flowers individually very small, white, in compound umbels without any bracts immediately below the umbel. Flowers from June to August.

Goutweed was widely cultivated as a vigorous perennial ground cover because of its strong spreading rhizome system, but the same characteristics enable it to escape from cultivation and invade lawns, hedges, gardens, roadsides and waste places, the habitats in which it occurs throughout most of southern Ontario. Some cultivated forms have variegated leaves, the leaflets being green near the centre but whitish around their margins. These are usually less aggressive than forms with entirely green leaves.

Goutweed is distinguished by its very vigorous, aggressive spreading habit, its widely spreading whitish rhizomes, and its compound leaves consisting of 3 to 15 broad leaflets which usually have a symmetrical base on the terminal leaflet but non-symmetrical bases on the lateral leaflets. 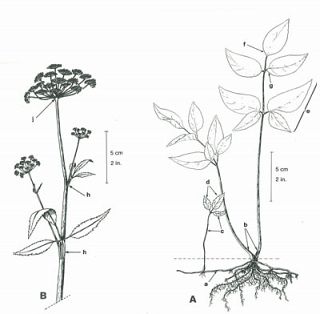 A. Non-flowering plant with 2 basal leaves and 1 radical leaf. B. Top of flowering stem. 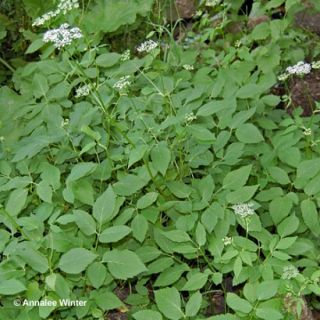 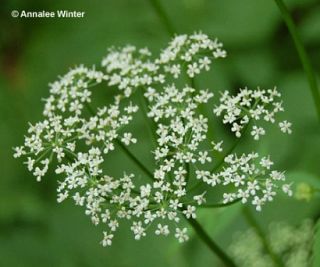 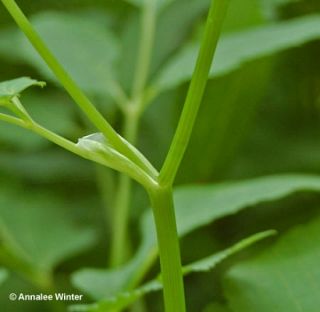 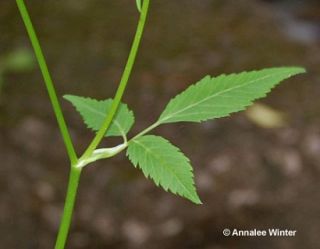 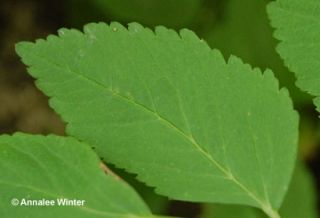 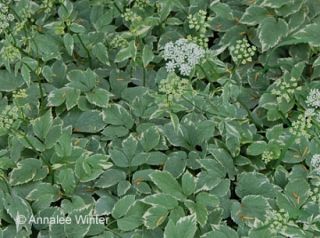 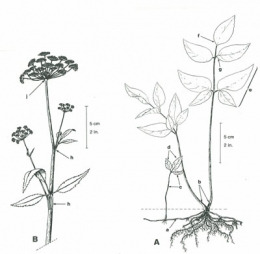