Leaves alternate (1 per node), long-stalked, ovate with a shallow notch at the tip on young plants but on older plants somewhat diamond-shaped, dull green above but lighter green and with prominent whitish veins below, and somewhat hairy.

Inflorescence a coarse, branching, bristly panicle made up of a short, thick terminal spike (a) and below it several to many short, lateral finger-like spikes (b), these pointing upward (B) if not crowded or outward if densely crowded, and smaller spikes in some lower leaf axils (c), each spike made up of many tiny flowers and spiny-tipped bracts (d) up to 8 mm long; each flower unisexual, having either 1 pistil or 5 stamens but never both; seeds black, shiny, round, flattened with a narrow, thin margin, and about 1 mm in diameter. Flowers from July to August.

Redroot pigweed is a common weed in cultivated fields, gardens, pastures, waste places, roadsides and other disturbed areas throughout Ontario.

- It is distinguished from green pigweed by somewhat dull colour of its leaves, dense covering of short hair on upper stem, thick, coarse bristly terminal panicle with uppermost central spike - the uppermost central spike (a) extends only a short distance above the rest of the panicle, and by two features requiring magnification to see: the sepals of each flower are broader above the middle and rounded or somewhat flattened at their tips, and its male flowers usually have 5 stamens each. - It is distinguished from Tumble pigweed and Prostrate pigweed by its tall, erect habit of growth, its larger and broader leaves, and its flowers crowded into a thick, terminal panicle as well as in some of the lower leaf axils; from Smooth pigweed by its coarse, harsh inflorescence.

Redroot pigweed is not known to be toxic. Both the leaves and the seed are edible.

Redroot pigweed is not an known allergen.

"The tender leaves can be boiled for 10-15 minutes or added to salad. The tiny black seeds make a nutritious flour". From: Peterson, LA, 1977, A Field Guide to Edible Wild Plants of Eastern and Central North America, Houghton Mifflin Company, New York. 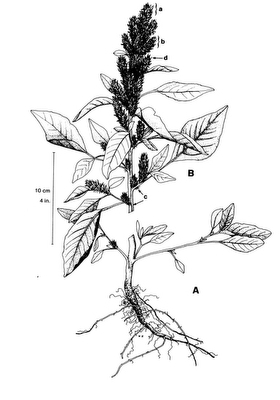 Redroot pigweed. A. Base of plant. B. Top of flowering plant. 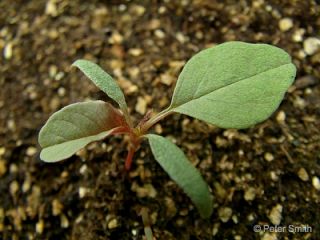 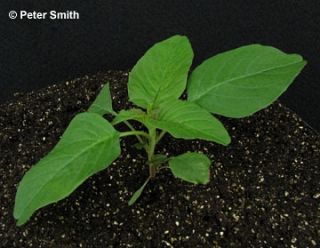 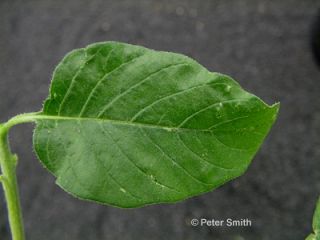 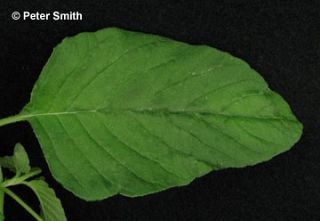 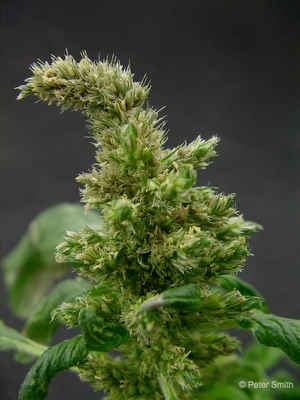 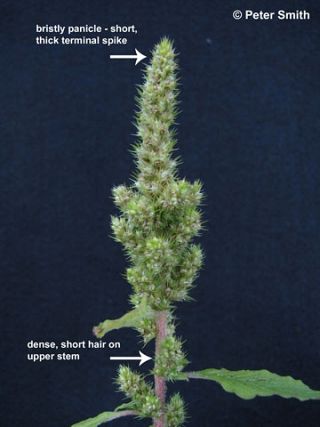 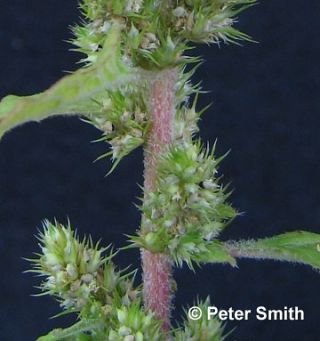 Close up of dense covering of short hair on upper stem (distinguishing it from green pigweed). 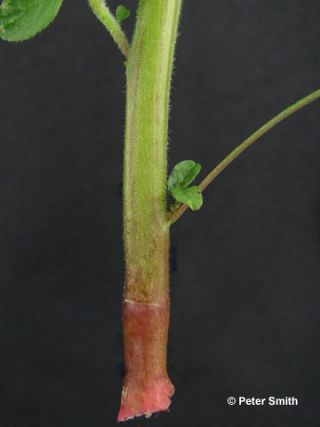 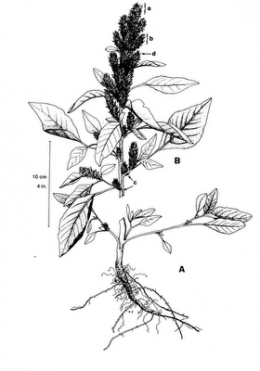