Lower leaves opposite (2 per node) but becoming alternate (1 per node)higher on the plant (B), bright green to slightly yellowish-green on young plants, becoming grayish-green on older plants, compound and finely divided, the final divisions (a) usually coarsely toothed.

Flower heads not showy, individually small, 2 - 5 mm (1/12 - 1/5 in.) across, green and inconspicuous but very numerous in raceme-like or spike-like branches and forming a distinctive terminal inflorescence (C); individual florets either male or female, but never both; all flowers within one flower head either only male or only female, but both male flower heads (D) and female flower heads (E) usually present on the same plant; heads of male (pollen-producing) flowers (D) in raceme-like elongated clusters at ends of branches, each male head (b) hanging downwards on a short stalk like a tiny inverted umbrella; female (seed-producing) flower heads (E) in axils of short, narrow, green bracts (c) near the base of each long cluster of male flower heads, each female head (d) with only a single flower and producing a single, hard, somewhat triangular or diamond-shaped seed with several, short, sharp spines (e) around the upper shoulder, the whole seed 3 - 5 mm long. Flowers from August to October.

Common ragweed is one of the most abundant weeds of cultivated land throughout southern Ontario, but is rare or absent in northern and northwestern parts of the province. It also occurs in gardens, flower borders, poorly kept lawns, edges of sidewalks, roadsides, fencelines, waste places, and in disturbed areas in pastures and meadows.

Common ragweed is not known to be toxic.

Common ragweed is the most important cause of hay fever during August and September. Although inconspicuous and not recognized by most people, the tiny male flower beads (b) hanging on their slender stalks produce huge quantities of very light pollen. As the pollen falls from these hanging flowers, it is caught by the wind and may be carried for distances greater than 200 km. Hay fever sufferers, therefore, may be affected by pollen from ragweed plants far away.

It is essential that Goldenrod, Solidago spp., not be confused with Common ragweed. Several species of Goldenrod occur throughout Ontario in meadows, pastures, woodland, river flats and roadsides, and have very conspicuous bright yellow inflorescences during the ragweed hay fever season of late summer and autumn. Goldenrods do produce pollen but only in small quantities, and their pollen is heavy and sticky. It is not carried on the wind and the plants are pollinated by insects. Because Goldenrod pollen is not carried on the wind, it must not be blamed as the source of irritation for ragweed hay fever sufferers. 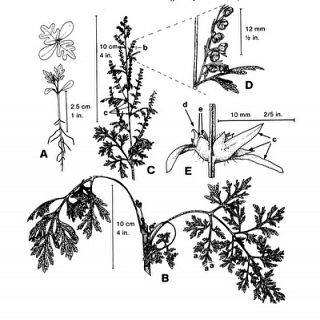 Common ragweed: A. Seedling, top and side views. B. Portion of stem with 2 leaves. C. end of flowering branch. D. 1-sided "raceme" with 7 heads of male flowers. E. Stew with 2 stalklwss heads, each with 1 female flower. 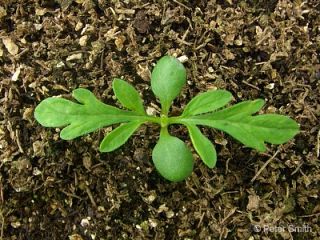 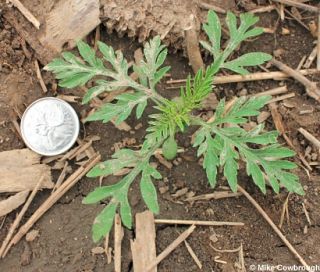 A 6 leaf ragweed seedling found in an Ontario corn field, early May. This is the maximum leaf stage that many post emergent herbicide labels list on their label to achieve control. 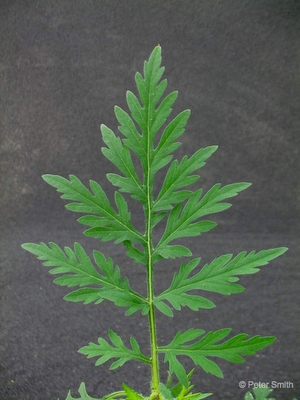 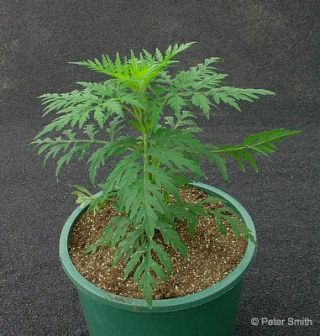 A ragweed plant just prior to flowering. 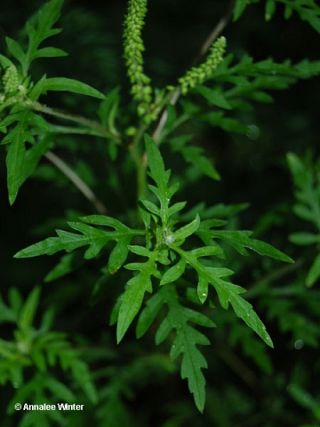 A ragweed plant during the beginning of pollination. 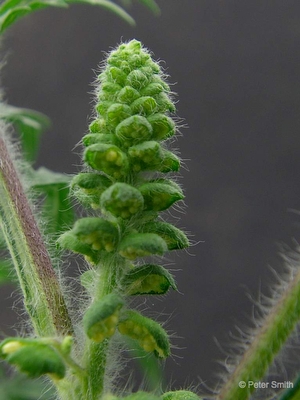 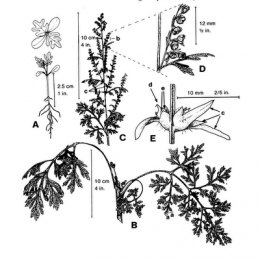