Annual, reproducing only by seed.

Stems erect, 0.4-4 m tall, usually much-branched and somewhat hairy; leaves opposite (2 per node) throughout the plant except towards the ends of the smaller branches at flowering time where they may be alternate (1 per node).

Leaves large, rounded in outline and 3- to 5-lobed, the lobes smooth or coarsely toothed; uppermost small leaves usually not lobed; in some plants most or all leaves not lobed but ovate with acuminate tips and only shallowly toothed; leaf surfaces usually rough (like medium sandpaper).

Giant ragweed occurs in river valleys, meadows, roadsides and occasionally in cultivated fields in the southwestern portion of southern Ontario.

It is distinguished by its very tall stature (up to 4 m in height), its large, lobed but not divided leaves, its long, slender spikes of pollen-producing flower heads and its large, angular seeds with spines around the upper shoulder.

Caution: The pollen of Giant ragweed is an important cause of hay fever during August and September, especially in southwestern Ontario.

Populations exist in Ontario that are resistant to: 1) glyphosate (WSSA group 9) 2) imazethapyr, cloransulam, chlorimuron and other WSSA group 2 herbicides. 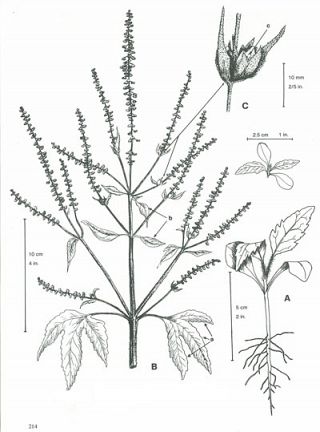 A. Seedling, top and side views. B. Top of flowering plant. C. Lower portion of flowering branch with 3 stalkless heads, each having 1 female flower. 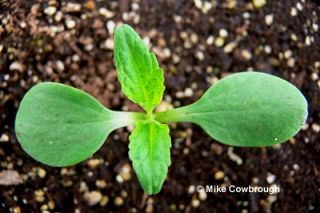 Giant Ragweed at the cotyledon to 2 leaf stage. 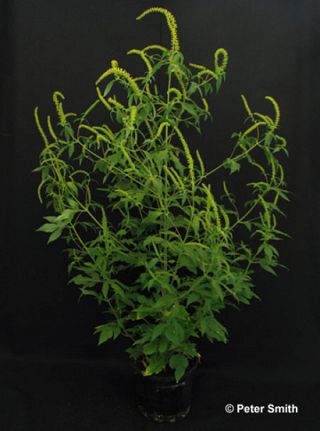 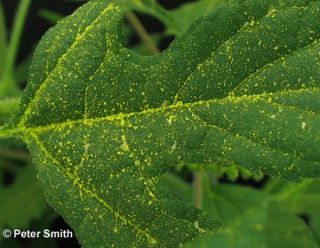 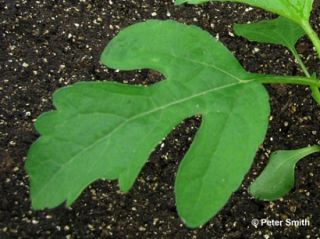 Large leaf of giant ragweed, rounded in outline and 3-5 lobes. 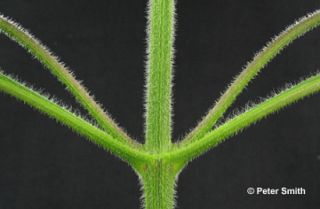 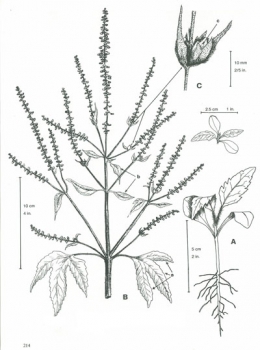