Leaves in a basal rosette the first year, compound (pinnately divided) with several simple (not lobed) or irregularly lobed leaflets widely spaced along each side, the margins of each leaflet smooth or toothed; basal leaves long-stalked, with scattered, tiny, round, shining glands embedded in both upper and lower surfaces and a few translucent dots through the blade; lower and middle stem leaves similar to those of the rosette but smaller with shorter stalks, alternate (1 per node); upper leaves small, narrow, stalkless, simple or with a few small lobes.

Flower heads small, erect on slender stiff branches, hard; ray florets absent; flower heads consisting only of many rosy, purplish disk florets; the corolla of each floret ending in 5 long slender lobes; the outer florets longer than the central ones; the head surrounded by an involucre of small, somewhat dry and membranous bracts, each bract ovate with a distinct brownish-black tip ending in a fine fringe like the teeth of a comb. Flowers from July to September.

Spotted knapweed occurs throughout Ontario and is most common in the southern part of the province.

It is distinguished by its pinnately divided rosette and lower stem leaves, the leaves slightly woolly, with tiny shining glands in both surfaces visible to the naked eye as shiny specks and with a few translucent dots visible as pinpricks through the leaf blade when viewed against the light, and by its showy rosy-purple flower heads surrounded by involucral bracts with dry and membranous, fringed brownish-black tips.

All knapweed species are considered noxious in Ontario and must be controlled if negatively affecting agricultural or horticultural land as outlined by the Weed Control Act R.S.O. 1990 Chapter W.5. 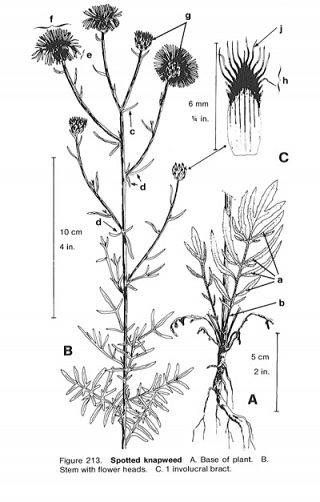 Spotted knapweed A. Base of plant. B. Stem with flower heads. C. 1 involucral bract. 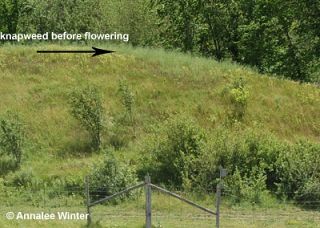 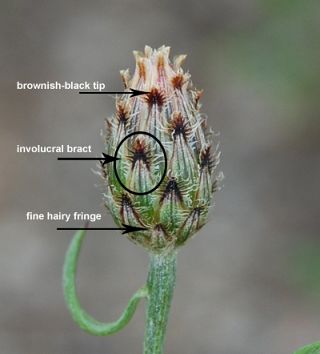 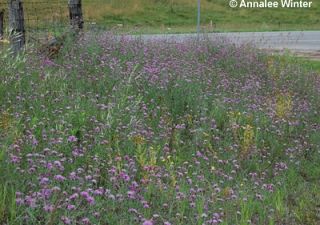 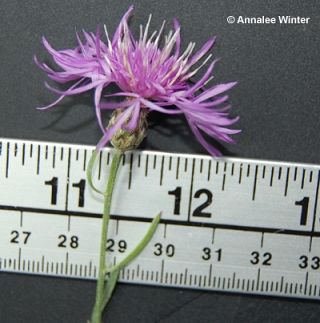 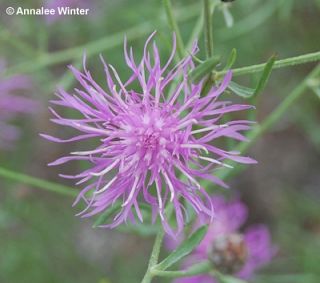 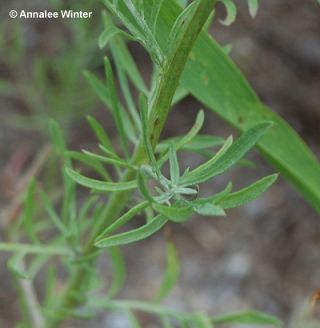 Spotted knapweed growing along fence in Central Ontario in July. 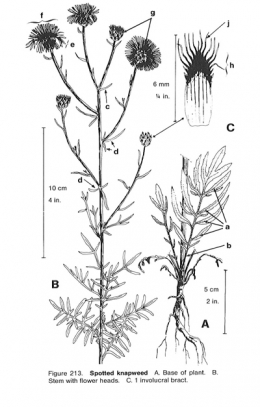