Stems are erect, 30-150 cm high but rarely much taller, usually widely branched and short-hairy. The middle and upper stems of large plants with narrow, very spiny leaf-like wings running lengthwise. On small plants the whole stem and its branches are spiny-winged, the wing drying and disappearing as the stem gets thicker.

Woody leaves in a large, flat basal rosette during the first year, each leaf deeply lobed, the lobes usually grouped in 2's or 3's together along each side of the leaf with distinctly unlobed portions between them, with long (about 1 cm), hard, sharp spines from the tips of each lobe and smaller spines along the margins; under-surface light green, finely woolly-hairy and soft to the touch. The upper surface dark green, with closely spaced, short, sharp prickles and very prickly to the touch stem leaves similar to rosette leaves but smaller upwards on the stem, alternate (1 per node).

Flower heads erect at tips of branches, large, 2.5-7.5 cm across, without ray florets but with long purplish disk florets and surrounded by an involucre of many, overlapping, very narrow, outward-pointing green bracts, each tipped with a firm, yellowish spine; seeds about 4 mm (1/6 in.) long, grayish-brown with darker lines, shiny, the hair (pappus) at tip of seed long and branching feather-like (plumose) Flowers from July to September.

Bull thistle is common throughout Ontario in pastures, edges of woods, waste places, fence lines and roadsides; its rosettes are occasionally troublesome in lawns and gardens.

It is distinguished from all other thistles by the covering of short, sharp prickles on the upper, dark green surface of the leaf blade, these prickles (apart from the obvious spines along the margins and tips of the lobes) make the surface very harsh to the touch. Its purple flower heads are larger than Canada thistle, its involucre bracts surrounding the heads are more slender and usually more numerous than in Nodding thistle or Plumeless thistle and the hairs (pappus) on its seeds are feather-like (have plumes) rather than being straight and unbranched as in the latter two thistles. 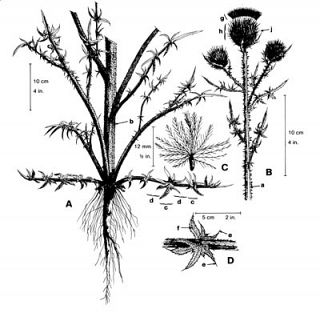 Bull thistle. A. Base of plant. B. Flowering branch. C. "Seed". D. Portion of a leaf showing its very rough, prickly surface.

Bull thistle at the rosette stage, commonly found at this stage during May and June in Ontario

Spines on the deeply divided leaf margin of bull thistle.

The hairy underside of a bull thistle leaf. 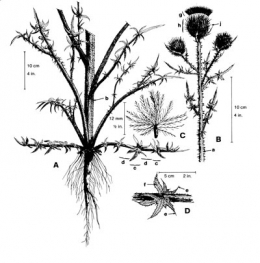