Stems erect (Fig 8), 1-2m high, hollow except for a partition at each node, round or slightly angular with purplish lengthwise streaks; base of stem slightly swollen (C) and usually with several, narrow cross-partitions (a) separating thin cavities (b), these visible by splitting the lower stem lengthwise downwards through the base; the freshly split surfaces usually soon developing little droplets of an amber or yellowish oily secretion.

Basal leaves at least twice compound, that is, each leaf divided once into 3 or more parts (c) and each of these parts divided again into smaller parts or leaflets (d), occasionally these again redivided into still smaller parts or leaflets; the veins in each leaflet going to the notches between teeth on the margins (Fig 6) (D); leafstalk (g) long, thin, often somewhat channeled and always broadened at the base (h) and partly surrounding the stem at the node (j); stem leaves alternate (1 per node), usually twice compound but leaves in the inflorescence frequently only once compound into 3 or 5 leaflets (k).

Flowers (Fig 2,3) individually small, white, in compound umbels at ends of the stems and branches, 1 large umbel made up of several small, simple umbels or umbelets; each compound umbel flattish or rounded across the top and up to 12cm in diameter but never spherical, usually without bracts or with only 1 or 2 bracts at its base; fruit a pair of oval or oblong, yellowish-brown "seeds" 2-4mm long with prominent, rounded, brownish, lengthwise ribs on the outer surface. Flowers from June to August.

The swollen base usually surrounded by 3 or more fleshy, thickened, tuber-like roots which taper into long thin strands (A).

Spotted water-hemlock is a native plant throughout Ontario, occurring in wet meadows, pastures, ditches, edges of streams and rivers, and swampy areas.

It is distinguished by the combination of its twice-compound leaves, base of split stem showing alternate narrow cross-partitions and thin cavities, and thickened tuberous roots surrounding base of stem; also by its white flowers in flattish compound umbels up to 12cm across, these without any or sometimes with 1 or 2 bracts immediately below the umbel and the veins in each leaflet going to the notches between teeth on the margins (Fig 6).

CAUTION! Spotted water-hemlock is the most poisonous of all Canadian plants to both human beings and livestock, all parts of the plant being poisonous. Extreme care must be taken when pasturing areas where this plant grows, and in collecting wild greens, roots or seeds for human consumption. http://www.cbif.gc.ca/pls/pp/ppack.info?p_psn=41&p_type=all&p_sci=sci for more information on toxicity.

CAUTION! Spotted water-hemlock can be confused with other species in the carrot family. It is important to be able to distinguish between this very poisonous species and other look-alikes that are not toxic. It is possible to mistake poison hemlock for other species, especially others in the carrot family. These species include; Angelica, Wild carrot (daucus carota), Goutweed (aegopodium podagraria), Giant hogweed (heracleum mantegazzianum), Water-parsnip (sium suave), Poison hemlock (conium maculatum) and Angelica (angelica atropurpurea). 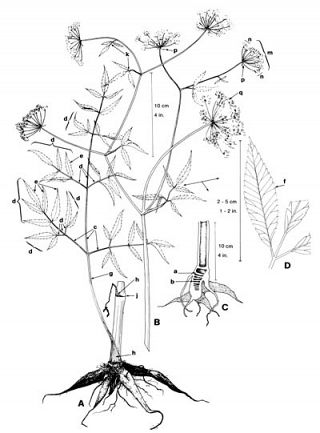 Spotted water-hemlock. A. Base of plant with 1 compound leaf and 5 tuberous roots. B. Top of plant with several flowering branches. C. Base of plant split lengthwise showing narrow partitions separating thin cavaties. D. Leaflet with veins going to notches between teeth. 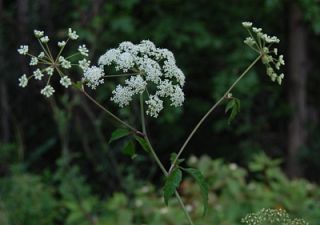 Stem and flowers of spotted water-hemlock. 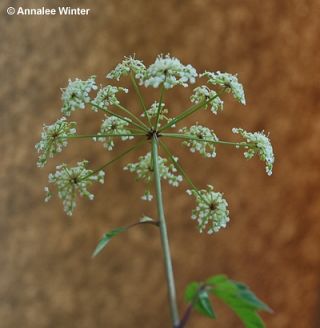 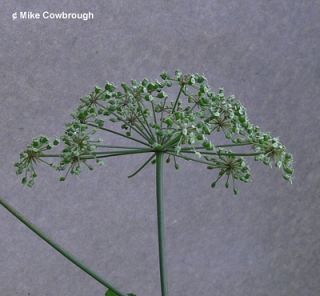 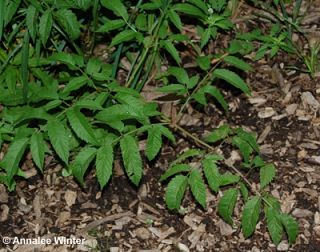 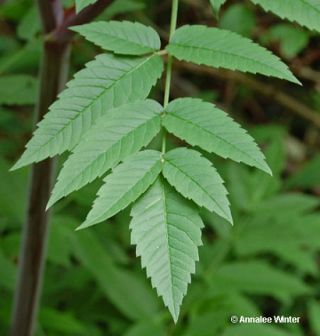 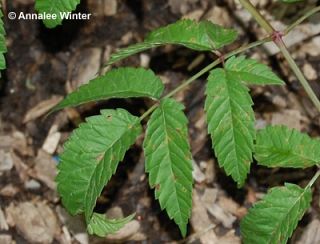 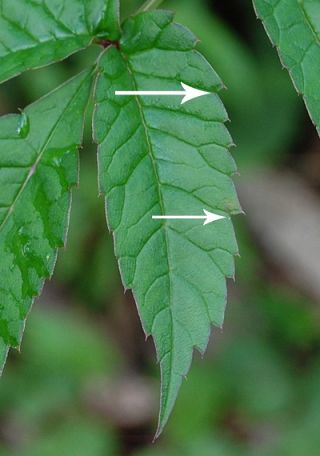 Veins in each leaflet go to notches between teeth on the margins. 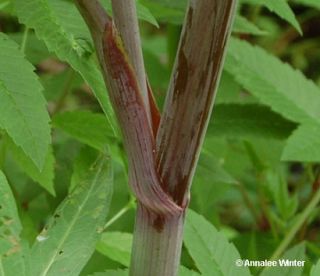 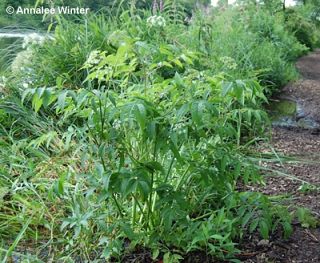 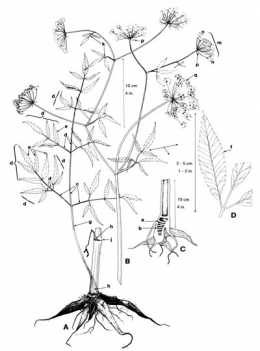