Reproducing by seed only.

Stems of second-year plants erect, up to 2m high, usually branched near the top, very prickly.

First-year plants becoming large rosettes, the leaves long, tapering towards both ends, somewhat toothed along the margins, with scattered, stout prickles (a) on the upper surface, especially along the midrib and with each side vein (b) curving forward and joining the next vein above it; stem leaves similar to rosette leaves but smaller, stalkless, broader towards the stem and tapering towards the tip, opposite (2 per node), their bases occasionally united and forming a cup around the stem which may hold a quantity of rainwater (Fig 6).

Teasel occurs throughout southern Ontario in waste areas, meadows, roadsides, and sometimes in cultivated land, usually in moist areas and on coarse soils.

Teasel plants have the ability to produce massive numbers of seeds that have been shown to remain viable in the soil for several years. Solecki, M.K. 1991. Cut-leaved and common teasel: profile of two invasive aliens. Biological Pollution: The Control and Impact of Invasive Exotic Species. Indiana Academy of Science, Indianapolis, Indiana, USA.

It is distinguished by its large rosette of shiny green leaves with stout prickles on the upper surface, its prickly stems with pairs of opposite leaves often having cup-like bases, its egg-shaped heads of flowers at the ends of stems and branches, these maturing into hard, brown structures completely surrounded by firm, sharp bristles (d).

Teasels are Native to northern Africa and Eurasia. Introduction to North America was likely made deliberately by settlers as ornamentals or accidentally as toys constructed from the flowering heads. Mature flower heads that are hard, brown and maturing into hard, brown, stiff-spined structures were used for teasing and carding wool (hence the common name). Solecki, M.K. 1991. Cut-leaved and common teasel: profile of two invasive aliens. Biological Pollution: The Control and Impact of Invasive Exotic Species. Indiana Academy of Science, Indianapolis, Indiana, USA. ODNR Division of Natural Areas and Preserves. Common and Cut-leaved Teasel. 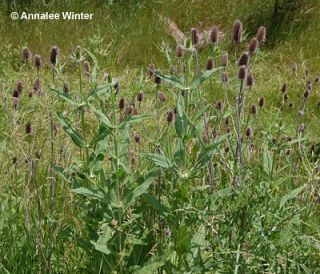 Teasel growing on roadside in Southern Ontario in early July. 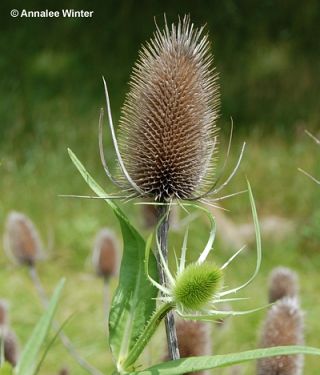 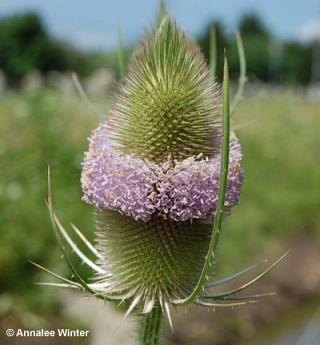 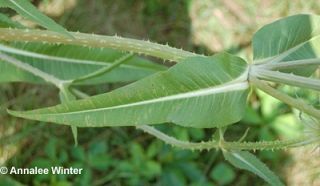 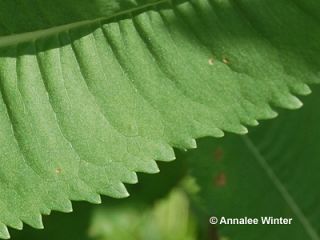 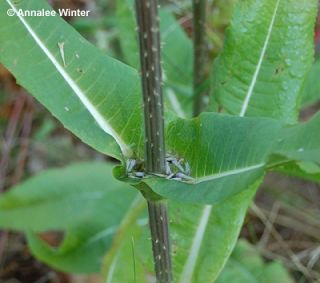 Stem leaves; opposite, united in a cup around stem holding rainwater. 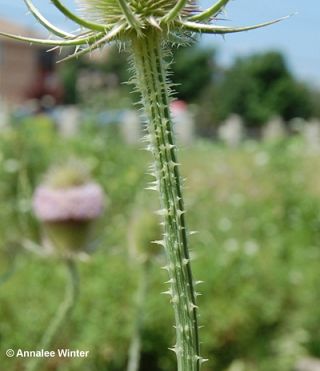 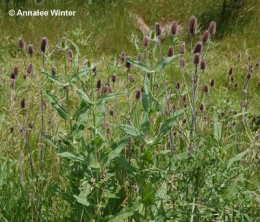