Cotyledons (seed leaves) of emerging seedlings 2-5mm long, and half or less wide, thick, fleshy and reddish or reddish-green on a bright red stalk; leaves mostly alternate (1 per node) except the first few apparently opposite (2 per node), and those near the tips of branches crowded together; all leaves flat but thick and fleshy, deep green to reddish-green, broadest near the rounded or squared tip and narrowed towards the base, completely hairless.

Flowers small, 5-10mm across, in axils of stem leaves or near the tips of branches, opening only on bright sunny mornings with 5 small, pale yellow petals which soon fall off, 6-10 tiny yellowish stamens and 1 pistil; seedpods nearly spherical, about 5mm in diameter, opening by a slit that goes all the way around the seedpod just below the middle so the top part comes off as a lid; seeds numerous, flattened, rounded or somewhat kidney-shaped, about 0.6mm across, black and shiny. Flowers from July to September.

Purslane is one of the most common weeds in gardens throughout Ontario, occurring also in row crops, waste areas and edges of driveways but not surviving under heavy shade and thus rarely seen in grainfields, hay fields or pastures. The very fleshy nature of Purslane enables it to continue flowering and ripening seeds for several days after being hoed or uprooted. Though rarely producing roots from the stem, if even a small portion of the root of an uprooted plant touches the soil, it can grow a new root system and become re-established.

Purslane is distinguished from similar prostrate plants by its reddish, fleshy stem with watery juice, its fleshy, thick, greenish leaves without teeth, its small flowers with yellow petals and its small, inconspicuous, spherical seedpods which open with a circular lid, scattering many tiny black seeds. Prostrate pigweed has a tougher stem, thin leaves, and tiny greenish flowers in somewhat spiny clusters in axils of leaves. The prostrate annual spurges have thinner stems and leaves, and all plant parts contain a white milky juice that is never found in Purslane. 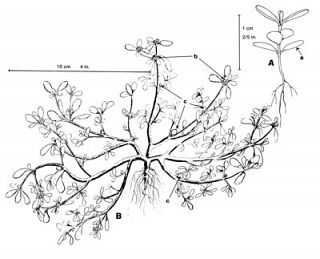 Purslane. A. Seedling. B. Plant. 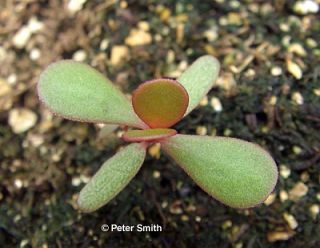 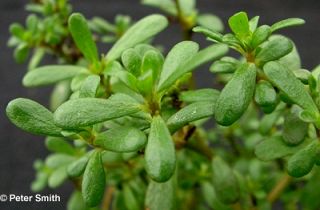 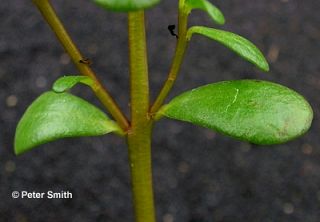 Opposite leaf orientation of a young purslane plant. Later emerging leaves are oriented in an alternate arrangement. 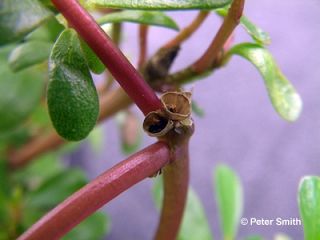 Seedhead of purslane located in the axils of stem leaves. 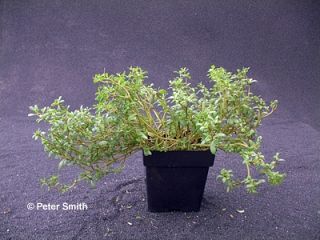 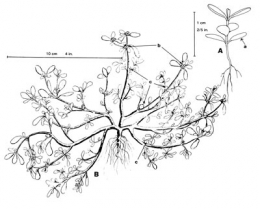