Reproduce only by seed.

Stems 1 or several from rootstalk, erect, 30-100cm high, branched in the upper part, hairy throughout.

Leaves (Fig 7,8) basal and alternate (1 per node) on the stem, softly hairy, very deeply lobed and toothed; basal and lower leaves long-stalked (a), the blade deeply divided into 5 main lobes palmately arranged (like fingers from the palm of the hand), each of the 5 lobes (b) irregularly jagged or coarsely toothed (c); middle leaves with similar shape but nearly stalkless; upper leaves progressively smaller with fewer and smoother lobes; the base (d) of each leafstalk flattened and partly surrounding the stem at each node.

Flowers bright yellow (Fig 5,6), about 2-3cm in diameter, grouped on long stalks in a much-branched inflorescence; sepals 5, green and small; petals 5; stamens numerous around the cluster of tiny pistils; after the petals fall, the cluster of seeds (e) is nearly spherical with each seed about 3mm long, flattened, egg-shaped in outline with a short hooked tip. Flowering and setting seed from late May throughout the summer and fall.

Tall buttercup is one of the most common weeds of pastures, meadows, and roadsides throughout Ontario. It can grow in a wide variety of habitats from low wet meadows, to rich woods, to the coarse soils of gravel pits and railroad cinders. There are many species of native and introduced buttercups, tall buttercup being of significant importance out of these species.

It is distinguished by its erect habit, the lower and middle leaves being similar in appearance, and the leaf blades deeply lobed but not completely divided into sections with distinct stalks (Fig 2).

Buttercups have a bitter, acrid juice which causes severe pain and inflammation when grazed by livestock. They are normally avoided, but when other feed becomes scarce they may be grazed with serious consequences.

Many species in the Buttercup family have been used for medicinal purposes by Native groups in Canada. Protoanemonin, a potentially active compound in these plants, is said to have beneficial effects on the healing process. As a result, these plants have been used in external poultices for cuts, boils and other skin sores. Historically they have also been used to treat colds, respiratory symptoms and muscle aches. However, further research is needed to determine the effectiveness and efficacy of these plants as treatments, as well as to understand more about the mechanisms by which protoanemonin may work. Turner, NJ. (1984) Counter-irritant and other medicinal uses of plants in Ranunculacea by native peoples in British Columbia. J Ethnopharmacol. 11(2):181-201. 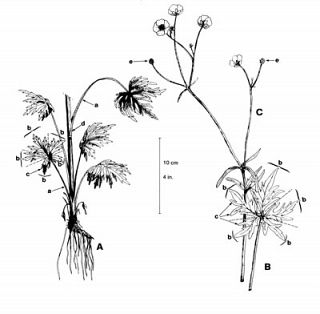 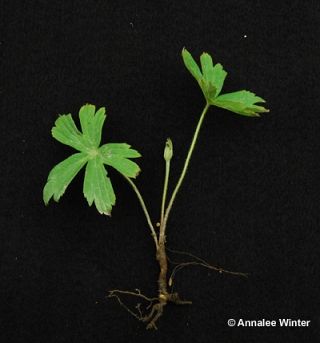 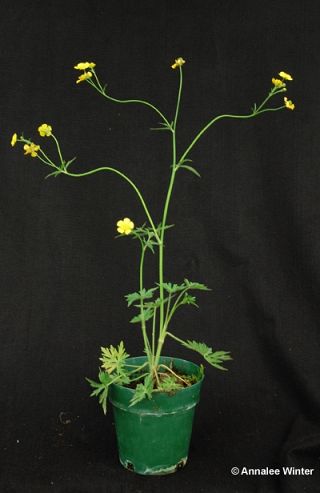 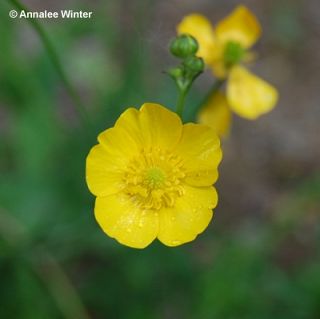 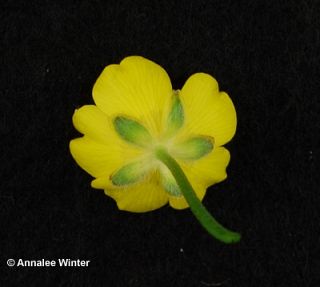 Back side of tall buttercup flower. 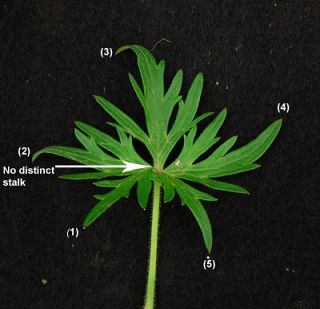 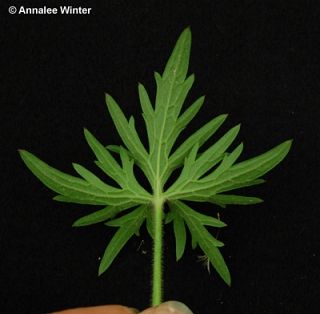 Back side of tall buttercup leaf. 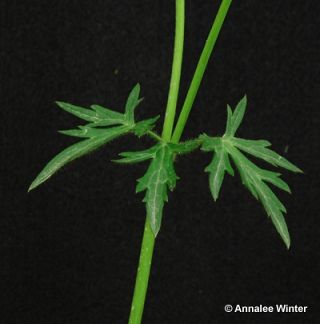 Leaf and stem of tall buttercup. 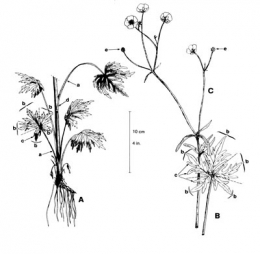