Flowers small, usually 2 to 5 grouped together in a small umbel (flower stalks all from 1 point) (a) on a short stalk sticking out from the side of the stem (b) rather than from the axil of a leaf (angle between leaf and stem) as in most other plants; calyx of 5 united sepals with 5 pointed lobes, small and not enlarging with the fruit (c); petals white or white tinged with purple, united into a star-shaped corolla with 5 sharp lobes resembling the flower of a potato but much smaller, about 9 - 15 mm in diameter; the short anthers (d) about 1.3 - 2 mm long, united and forming a yellow column in the centre of the flower; fruits are berries, always larger than the calyx, green at first but turning dark brown to black and juicy when mature, 5 - 9 mm in diameter, containing several, small, flat seeds and 4 to 8 small, hard, irregular stone-like crumbs. Flowers from June until late autumn.

It is distinguished by being annual plant with thin, ovate to diamond-shaped leaves, small umbels of flowers on short stalks from sides of stems (not from leaf axils), small, white flowers, and small, black berries that are not partly enclosed by their expanded calyxes.

The berries of Eastern black nightshade are reputed to be poisonous and thus the plant is sometimes called â€œdeadly nightshade,â€ a name belonging to a different plant. Until more information is available about their palatability, it is advisable not to eat these attractive berries.

Feeding experiments have demonstrated that this plant can be toxic to cattle if it comprises about 25% or more of the forage intake.

No information available at this time.

No information available at this time. See notes on toxicity. 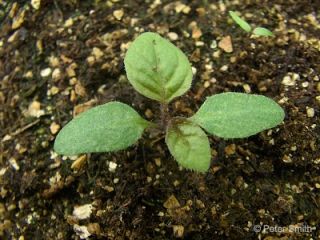 Seedling at the 2-leaf stage. 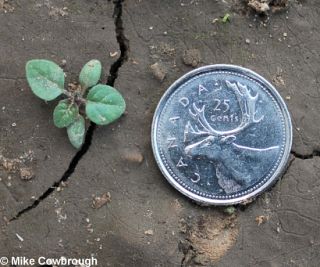 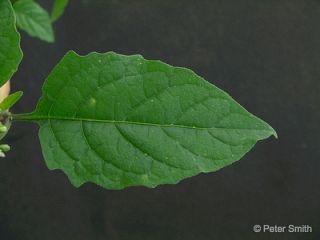 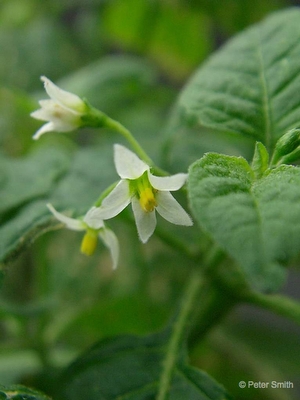 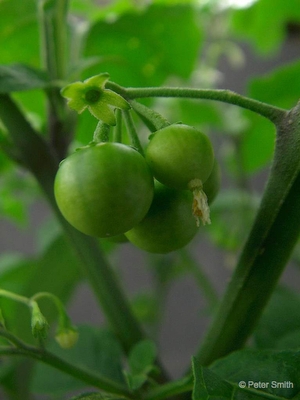 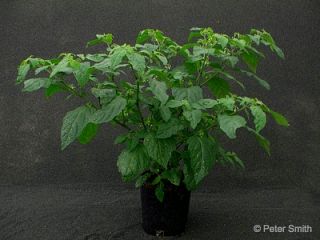 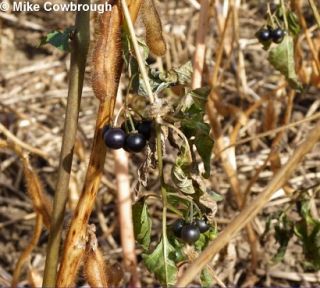 Mature black berries found in an Ontario soybean field during October. The berries will stain the soybean seed and reduce quality.