Stems erect, 60 - 150 cm high, smooth and hairless on the lower part but glandular-hairy towards the top and on branches, hollow.

Leaves of seedling plants (A) broadly club-shaped with irregularly toothed margins, the teeth ending in weak prickles (c), remnants of the cotyledons (seed leaves) (d) often visible; leaves of shoots from perennial roots (B) variable in shape, the lower ones shallowly to deeply lobed and irregularly toothed, reminiscent of Dandelion leaves but the teeth ending in small, weak prickles, with winged stalks (e); alternate (1 per node); middle and upper leaves similar but smaller with shorter stalks and clasping the stem with small, rounded basal lobes (f), or sometimes with larger basal lobes similar to those of Spiny annual sow-thistle; uppermost leaves (g) small, narrow, without lobes and with only a few teeth.

Upper stems, branches and involucral bracts (h) surrounding the flower heads usually densely covered with dark hair (j); each hair with a tiny gland (k) at its tip (these hairs, when seen under magnification, resemble a tiny lollipop) (these glandular hairs do not occur in its sister variety, Smooth perennial sow-thistle); flower heads showy, bright yellow, 2.5 - 4 cm across; each head containing only strap-shaped ray florets (like Dandelion flower heads and similar to those of Smooth perennial sow-thistle); seeds brown with lengthwise ridges and finer cross ridges; whole plant with sticky white juice and a rather sour odour. Flowers from June to late autumn.

It is distinguished before flowering by its variously lobed leaves with weakly spiny teeth; its soft, somewhat fleshy, bright green stems mostly arising directly from horizontal yellowish-white, fleshy, brittle, cord-like roots (b), these roots bearing many, small, whitish buds (a) able to grow into other new leafy stems; and the whitish vertical underground portion (m) of each upright stem resembling a root, but usually not tapering downwards except in first-year plants (A) which started from seed. Flowering plants are distinguished by their showy, large, bright yellow flower heads and the covering of glandular hairs (j) on the involucre (h) and the upper stems and branches.

Perennial sow-thistle is not know to be toxic.

Perennial sow-thistle is not a known allergen.

"The young leaves can be added to salads or boiled for 10-15 minutes and eaten." From: Peterson, LA, 1977, A Field Guide to Edible Wild Plants of Eastern and Central North America, Houghton Mifflin Company, New York.

No documented cases of herbicide resistance to date. For more information on weed resistance: http://www.plant.uoguelph.ca/resistant-weeds/

Perennial sow-thistle. A. Young plant from seed. B. Base of plant from perennial root. C. Top of flowering stem. 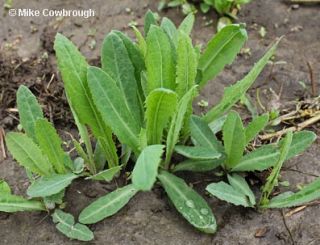 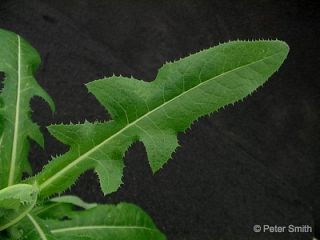 Perennial sow-thistle prior to flowering. 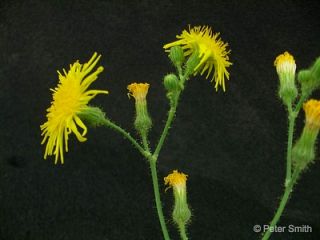