Leaves are 2-5cm long, very narrow, flat or slightly rounded in cross-section. The leaves of young plants are in a rosette-like cluster resembling grass. On older plants leaves are in whorls of 6 to 30 or more at each node (a).

Flowers small but often very numerous on short stalks (1-3cm) in the upper part of the plant, with 5 green sepals and 5 white petals (b) about 3mm long, usually 10 stamens and 5 styles on the top of the small oval seedpod. The mature seedpod (c) is longer than the sepals, splitting into 5 divisions to release the numerous black, flat, round seeds, each of which has a narrow pale or white wing around its margin. Flowers from June to October.

Corn spurry is found in all parts of Ontario but is most common on light sandy soils.

It is distinguished from other plants in the Pink Family by its whorled leaves; from the bedstraws by its annual habit, its whorls of usually more than 8 narrow leaves on round stems, and its somewhat larger flowers with seedpods containing many small seeds; from the Prostrate spurges by the absence of white, milky juice; from Carpetweed by its erect stature and its flowers at the ends of the branches rather than in axils of leaves; and young plants are distinguished from those of Russian thistle by their whorled leaves, their blunt leaf tips, and the absence of reddish lines on the stem. 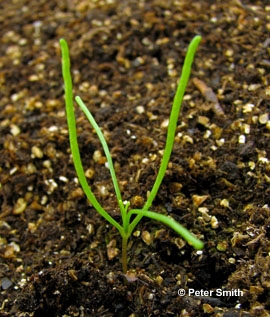 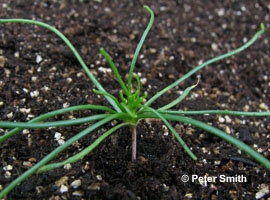 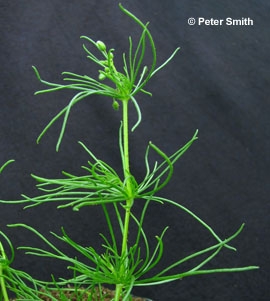 Close up of long, narrow leaf. 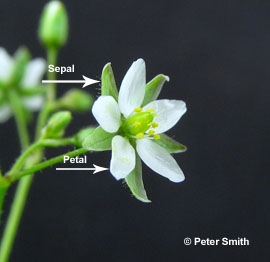 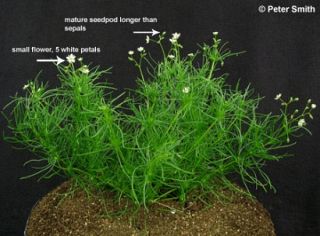 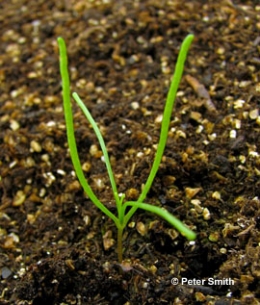