Spreading by seed and by woody rhizomes (underground stems) which produce dense patches.

Stems woody and of two kinds, the most frequent kind growing horizontally on or just below the ground surface with upright leafy stalks 10-80 cm high; the second kind is a climbing vine which develops aerial roots and may climb 6-10 m per node (Fig 1:a).

Compound, each compound leaf (Fig 1:b, Fig 4) consisting of 3 leaflets (Fig 1:c) at the tip of a long leafstalk (petiole) (Fig 1:d); the middle leaflet has a longer stalk (Fig 1:e)than the 2 side leaflets (Fig 1:f); overall leaflet shape and type of toothing highly variable between leaflets on the same stem, as well as among plants within a patch and between patches; leaflets ranging from narrow to broadly ovate with a smooth margin (Fig 1:A/C), to a few scattered, shallow, rounded teeth (Fig 1:D), to several, coarse, deep-pointed teeth which give the leaflet a lobed appearance (Fig 1:E); leaves purplish to reddish when unfolding in spring (May to early June), bright green and often shiny (with a varnished appearance) in summer and turning a vivid orange-red to wine-red in autumn in sunny areas, but often lacking the bright colour in shaded places; leaflet smooth and hairless on both surfaces except for small tufts of brownish hair on the underside along the mid-vein and in the angles formed by the mid-vein and some of the lower branching veins.

Flowers small, white or greenish, with 5 sepals and 5 petals (Fig 1:g), in branching clusters from the leaf axils (angles between leafstalk and stem); flower clusters inconspicuous because they are often hidden below the dense leaf canopy and because many plants do not flower every year; each flower in the cluster followed by a whitish to dull greenish-yellow, dry, berry-like fruit (Fig 1:h, Fig 5) about 5 mm in diameter with lengthwise ridges and somewhat resembling a peeled orange. Flowers in June and July; berries produced by September but often remaining on the low leafless stems all winter.

Poison-ivy occurs under forests, in edges of woodland, meadows, waste areas, fence lines, and roadsides throughout most of Ontario south of a line from North Bay to Kenora. The tall climbing vine form, however, is mainly confined to the counties bordering Lake Erie, Lake Ontario and the lower Ottawa Valley.

It is distinguished by its low growth or its occasional climbing habit, its 3 leaflets in each compound leaf, its leaves deep green in summer, reddish in spring and fall, its clusters of whitish to greenish-yellow berries, and its short, erect, leafless stems which frequently retain a few berries all winter long. Poison-ivy is sometimes mistakenly called Poison-oak because some plants have very coarsely toothed or lobed leaflets. The true Poison-oak, Rhus toxicodendron occurs in the southern United States, but not in Canada.

All parts of Poison-ivy, including the roots, contain a poisonous substance which causes an irritating inflammation of the skin of most people, the inflamed areas frequently developing blisters and accompanied by intense itchiness. The poisonous substance is an oily resin contained in the juice of the plant. Contact with any broken part of the plant, with leaves which have been chewed by insects, or with shoes, clothing, implements, or pets which have touched broken parts of the plant may cause a person with sensitive skin to react. Dry twigs in winter or dug-up roots in summer can often cause a reaction. Burning Poison-ivy leaves and stems releases the poison in the form of tiny droplets on particles of ash and dust in the smoke, and can cause a severe reaction on exposed skin and in the breathing passages if a sensitive person breathes or passes through the smoke of such a fire. The author had a severe reaction on his arms and legs after trimming a specimen plant with hand clippers. Although the plant parts never touched his clothes, it seems that microscopic oil droplets may have squirted out while cutting the stems and vines and penetrated the cotton of his trouser legs and shirt sleeves. In cases of suspected contact with the plant, washing the skin and clothing with a strong soap may not prevent a reaction but it will help minimize reinfection to other parts of the body or to other individuals. If a reaction does develop, one should seek the advice of a physician for proper treatment. Poison-ivy is designated as a noxious weed by the Province of Ontario, and it is the duty of every person in possession of infested land to destroy noxious weeds thereon. 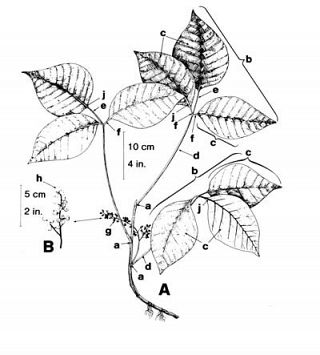 (A) Low growing form of poison-ivy with short erect stem and flower cluster from the axil of 1 compound leaf. (B) Cluster of dry while, berry-like fruits produced from flower cluster. 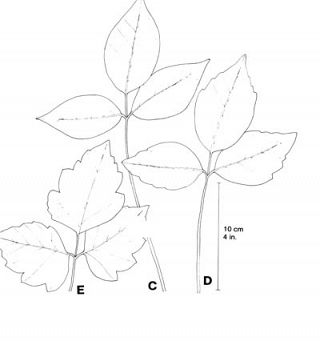 Poison-ivy. Variation in margin and lobing of leaflets. 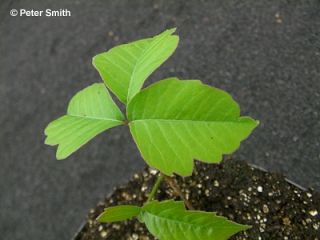 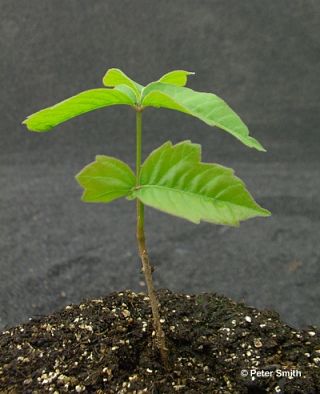 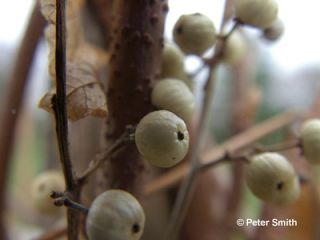 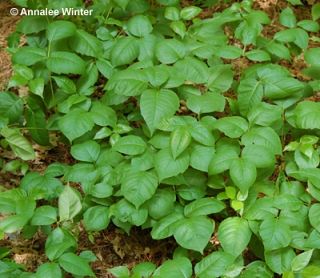 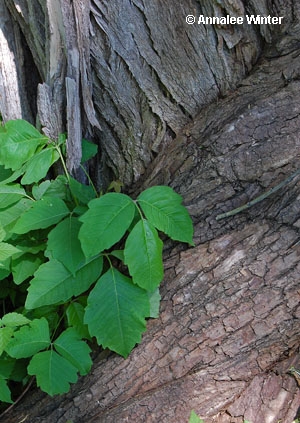 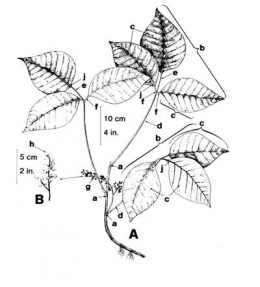