Stems erect or much-branched near the base and becoming erect, smooth or with fine, slightly sticky hair; stems with a somewhat fleshy texture (hence "purslane" in the English name).

Leaves with a somewhat fleshy texture. Lower and middle leaves opposite (2 per node), oblong or somewhat linear, smooth or irregularly toothed, lower ones short-stalked, middle and upper ones stalkless; upper leaves alternate (1 per node), smaller and narrower, each with a flower in its axil.

Flower stalks extremely short; corolla flat, 4-lobed, 2mm across, white or whitish; seedpods flat, heart-shaped with a notch at the top; each leafy bract usually much longer than its flower or seedpod. Flowers from early May to July, and occasionally again in autumn.

Purslane speedwell occurs throughout Ontario and in field crops is most commonly found in winter cereals. It is also found in gardens, orchards, lawns, waste places, roadsides, railways, stony areas and occasionally in greenhouses.

It is distinguished by its somewhat smooth and fleshy stem and leaves, its lower leaves opposite and narrow, upper ones alternate, smaller, and its tiny white flowers on very short stalks, followed by small heart-shaped seedpods. 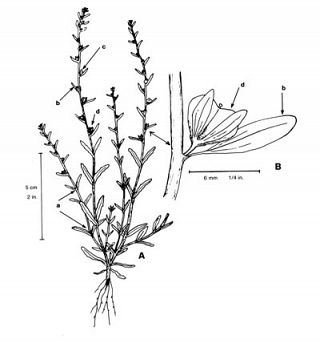 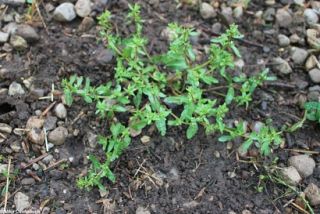 Flowering plant found in an Ontario winter wheat field in May, 2012 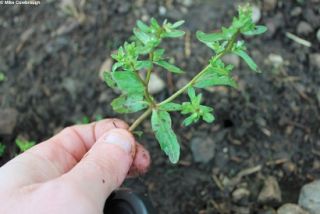 A close up of the stem and leaf of purslane speedwell 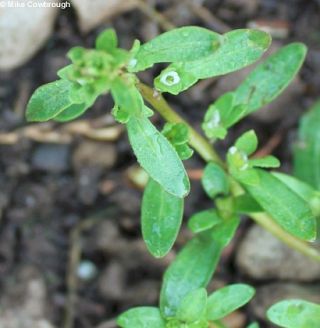 A closer look at the older leaves of purslane speedwell that have slightly toothed margins. 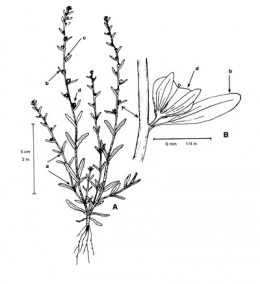